My Macbook Pro’s hard drive died recently, again. The Apple Store had to order the replacement Hitachi 750GB hard drive which took several days. I have a suspicion that Apple is using refurbished hard drives because it has just been two months since the last hard drive replacement. Hitachi is a brand I can trust… to fail quickly… because in addition to these two failures, when I first got my brand new Macbook years ago, the Hitachi drive died within three months. This time, I decided to install a Samsung EVO 850 500GB solid state hard drive to avoid having to visit the Apple Store again.

To start, you need to find the Core Storage Logical Volume identifier used by the wrapped HFS+ partition. It is the long alpha-numeric string (“1FC06AF9-EED2-4066-BE3F-FE47166A2190” on my machine) listed under the HFS+ partition (“/dev/disk1/”) in the “diskutil list” command output above.

You can also find the Logical Volume identifier and encryption status by running the “diskutil cs list” command in the Terminal app. 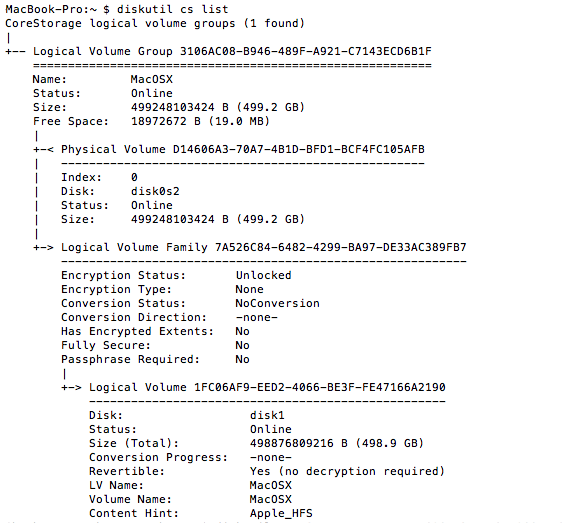 Locate the bottom-most “Logical Volume” entry which has the identifier listed. Underneath that is the “Revertible: Yes (no decryption required)” line which indicates that the volume is not encrypted and can be reverted.

Once you have the Logical Volume identifier, you can revert the Core Storage volume back to a plain HFS+ partition using the “diskutil coreStorage revert” command like so:

You will need to reboot the Macbook. If you don’t reboot and run the “diskutil list” command, it will incorrectly show the logical volume (under “/dev/disk1”) even though the Core Storage has been replaced by HFS+ (under “/dev/disk0”).

Once the old HFS+ partition was back in place, I was able to delete, merge, and resize to my heart’s content. The solid state hard drive makes Mac OS X blazing fast; I regret waiting so long before installing one.