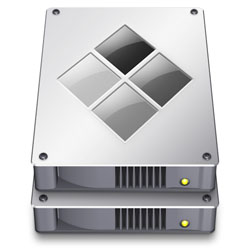 I recently got a mid 2012 Macbook Pro 15in laptop. It came with Mac OS X 10.7 Lion which I promptly upgraded to Mac OS X 10.8 Mountain Lion. I then installed Windows 7 Boot Camp on it. I thought I had the perfect setup.

To my dismay, I found that while the Macbook lasted 6 hours or more while running Mac OS X, the Windows 7 lasted at best 3 hours. The reason for the short battery and heat (the laptop got very hot under Windows) was that under Windows, the discrete graphics card was active all the time! The Boot Camp 4.0 drivers for Windows did not support switching graphics between the integrated and discrete video cards, but instead used discrete all the time.

I decided to use Mac OS X as often as I could to take advantage of the battery life and only switch to Windows when I needed to. Under Mac OS X, there is an neat application called gfxCardStatus which allows me to force Mac OS X to use only the integrated graphics card. This is useful because I found that unlikely applications, like Powerpoint, would switch the Mac OS X to use discrete graphics.

Unfortunately, sharing information between the two operating systems is inconvenient because while Mac OS X can read NTFS, it can’t write to it. And while Windows can read HFS+, it cannot write to it. There is a commercial product called NTFS for Mac that allows Mac OS X to write to NTFS, but some reviews indicated that the NTFS partition might get corrupted. Alternatively, I could use a cloud service like DropBox but I would have to pay for more storage space, there would be duplicated files on both the Mac OS X and Windows partitions, and there would be a dependency on having Internet access to sync those duplicated files. The best solution (free, non-wasteful, and fast) would be to have a shared FAT32 partition which both Mac OS X 10.8 Mountain Lion and Windows 7 can read and write to. 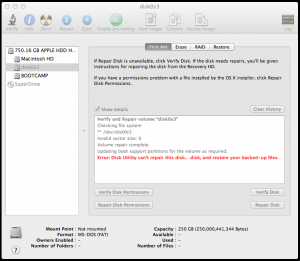 Update: Initially I used an exFAT partition, instead of FAT32. (exFAT is an enhancement of FAT32 that removes the 4GB file size limitation.) However, after copying back my data to the shared exFAT partition and accessing it from both Mac OS X and Windows 7 under VMware, the shared partition got corrupted within a day. I did some research and found that exFAT on Mac OS X often got corrupted and would disappear. Disk Utility was not able to repair the exFAT partition. I decided to reformat the shared partition as FAT32 using Disk Utility with “MS-DOS (FAT)” format; I can live with the 4GB file size limit, but I can’t live with corrupted data. FAT32 is older (less buggy and more reliable) and uses two file allocation tables (while exFAT uses just one) so it should be more recoverable. I’ve updated this post to refer to FAT32, instead of exFAT.

To create the shared FAT32 partition would require me to re-size the existing partitions. The Mac OS X Disk Utility supports re-sizing the Mac OS X’s HFS+ partition without destroying its contents. Under Windows 7, there are 3rd party tools to re-size the NTFS partition but success was not guaranteed and there was a chance that the Windows Boot Camp partition might become unbootable.

Because I also had an issue with running the Windows 7 Boot Camp under VMware 4 and 5 (I couldn’t figure out why), I decided to start from scratch with a new Boot Camp. After backing up the data on Windows 7, I ran the Boot Camp Assistant to delete the existing Boot Camp partition.

My original Mac OS X Lion came with 3 partitions on the hard drive using the GUID Partition Table (GPT) schema, which we can see by running “diskutil list” under the Terminal command line: 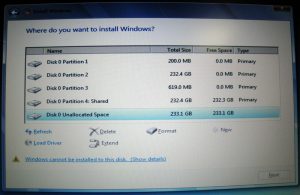 Here’s how to erase and merge the Mac OS X Lion Recovery partition:

We are ready to create a Boot Camp partition for Windows 7 and the shared FAT32 partition. Before we start, there are two important points to keep in mind:

I decided to split my 750GB hard drive into 3 equal 250GB partitions for Mac OS X, Windows 7, and Shared. Here are the steps I took to create a Boot Camp with the Shared partition:

Most info above derived from: