Tip: If you just want the fix for the Inaccessible Boot Device error, skip to the last section below. 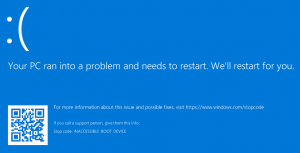 Half a year ago, I attempted to update my Windows 10 desktop from version 1809 to 1903. The update resulted in an “INACCESSIBLE BOOT DEVICE” error on restart. I had encountered the BSOD (blue screen of death). My Windows 10 installation was messed up.

Thankfully, my documents and personal data were backed up. But I did not want to reinstall Windows 10, all my programs, and customizations.

I scoured the Internet for solutions. I tried all the following without success:

Note: I thought the BSOD might be caused by BitLocker, but I did not want to disable BitLocker and expose my data. Turns out that BitLocker was not the cause.

In desperation, I manually uninstalled the last 3-4 most recent updates. I would not recommend doing this highly dangerous action because it did not fix the BSOD and in the end, left my Windows 10 system in a partially corrupted state.

Automatic Rollback to the Rescue

Eventually after 3-4 boot failures in a row, Windows 10 automatically performed the rollback from 1903 to 1809.

My Windows 10 desktop was alive again, but Cortana and Windows Search no longer worked. (The Settings and Cortana-related shortcuts on the startup menu were broken as well.) Evidently, Microsoft had separated the Cortana and Windows Search functions in the 1903 update. My manual update uninstalls, combined with the 1903 rollback, resulted in a broken Windows 10 system.

I lived with that broken system for half a year.

No Need for Update Assistant

Recently, I saw that Microsoft had released the 1909 update. I thought that the 1909 update might have fixed the “INACCESSIBLE BOOT DEVICE” BSOD error. Having nothing to lose, I decided to do the update.

The Windows 10 “Check for updates” did not show the 1909 update, so I decided to download and run the “Windows 10 Update Assistant”. The Update Assistant downloaded the latest updates and asked me to reboot. After reboot, the update screen appeared and then immediately disappeared, and then, the Windows 10 login was displayed. I logged in and the “winver” command showed that my Windows 10 desktop was still running version 1809. Fail.

I recall reading somewhere that one could do a full upgrade from one version of Windows 10 to another version using the ISO image. It would be more of a replacement than an update.

Surely, I thought, this would fix my “INACCESSIBLE BOOT DEVICE” BSOD error by totally replacing my partially corrupted Windows 10 installation. Again, having nothing to lose, I decided to do the full upgrade.

Here were the steps I took:

Note: There are two alternative methods that might also do the full upgrade, but I did not try them. First, the Media Creation Tool has an “Upgrade this PC now” option (instead of “Create installation media”). Second, one could create an ISO file (instead of “USB flash drive”), mount it, and run the “setup.exe” from there.

After reboot, the update screen took a long time (about 20-30 minutes) before the Windows login screen appeared. After logging in, I was able to verify that both Cortana and Windows Search were working again. Hurrah!