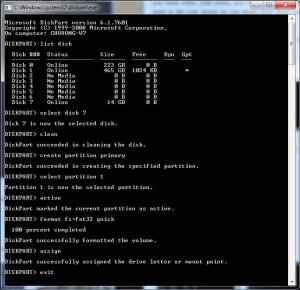 If you are interested, here’s the technical reason why our bootable USB flash drive will use the MBR layout and FAT32 format: Computers, including both Windows and Macs, boot using a standard called UEFI (Unified Extensible Firmware Interface), which is based upon the EFI specification (Extensible Firmware Interface). (When folks say EFI, they are usually referring to UEFI because all modern computers use UEFI.) UEFI is a replacement for the previous BIOS method of booting up, but UEFI still supports the older BIOS method. The BIOS boot method uses the MBR (Master Boot Record) layout. In addition to BIOS+MBR, UEFI also supports the new GPT (GUID Partition Table) layout. The UEFI specification requires bootable removable media (such as a bootable USB flash drive) to use the MBR layout and FAT32 format.

To create a bootable USB flash drive, do the following:

Info above derived from Install Windows 7 From a USB Flash Drive.