Two months ago, Google Maps stopped telling me directions when navigating on my Apple iPhone 6s. I could still navigate without the voice prompts though. Two week ago, my current location would only update once per minute. I couldn’t navigate at all. Sometimes, after 5-10 minutes, the GPS location updates would start working correctly again. In any case, my GPS was broken. (Apple Maps exhibited the same GPS problem.)

Note: The intermittent GPS updates reminded me of the refurbished iPhone 5s I got from T-Mobile. It would abruptly lose power in very cold weather. Later I found out that the phone was missing parts inside, specifically, the metal shield over the battery connector; so during cold weather, some parts must have contracted and shorted the battery out. Maybe my GPS problem was similar. Alas, no parts were missing from the iPhone 6s. 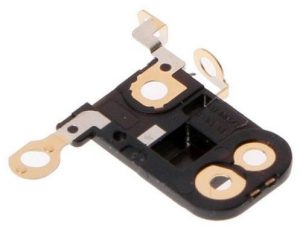 I thought it was a software bug because I had updated to iOS 11.2 near the time the GPS started misbehaving. Updating to iOS 11.3 did not fix the GPS problem. I reset the location configuration (under Settings, General, Reset, Reset Location & Privacy), did a “Reset All Settings”, and performed a full system restore (using iTunes), but none of those actions fixed the GPS.

After researching, I could only conclude that the GPS issue was a hardware problem. Most likely, the GPS antenna needed to be replaced.

Tip: If you no longer hear the Google Maps (or Apple Maps) navigational voice prompts, then the iPhone probably was not able successfully to acquire the GPS satellites. However, Google Maps will still roughly (and inaccurately) update your position using the cellular, Wi-Fi, and Bluetooth networks.

Note: To add to the confusion, there is a second Wi-Fi antenna which iFixit calls the “Wi-Fi diversity antenna”. I suppose it is necessary to increase the Wi-Fi reception range.

I ended up purchasing a used, original iPhone 6s antenna by mistake. I was looking for an authentic iPhone 6s antenna (instead of the cheaper “OEM” clones), found one for a reasonable price (almost twice as expensive as the OEM), thought it was new, and purchased it. I installed the antenna by following instructions from the Youtube video above and iFixit’s iPhone 6s Cellular Antenna Replacement page.

Once the antenna was replaced and after testing, I found that the GPS was still not working correctly. While I didn’t see the intermittent GPS location update issue, it would still take several minutes before Google Maps would start updating the location correctly.

Note: Once the GPS was working, I did noticed that in Google Maps (and Apple Maps), the shadow on the location dot pointed in the wrong direction. It was 80 degrees off from my car’s direction of travel. Strangely, the directional shadow was correct when Google Maps was giving walking directions.

Some forums recommended installing an iOS app called GPS Diagnostic: Satellite Test (available for $2.99). The app provided more information on the GPS function and indicated that it was taking several minutes before the phone could acquire the GPS satellites.

Tip: Test the GPS outside with an unobstructed sky. The phone will have problems acquiring the GPS Satellites inside a house.

In conclusion, I purchased a brand new iPhone 6s OEM antenna, installed it, walked outside, opened up the GPS Diagnostics app, and within a few seconds, the phone successfully acquired the GPS satellites. I’ve tested the GPS navigation a couple of times since then and Google Maps worked immediately as expected. The directional shadow was still wrong, but hopefully it will fix itself over time.

Update: Sporadically, the GPS would not be able to acquire the satellite when I first turn it on. I found out that it was because I hadn’t tightened the screws on the GPS antenna enough. Unlike the screws on the other parts (like the metal shields which you don’t need to tighten too much), the screws on the antenna need to be tight to ensure a solid metal connection.

I hope the above will help you to fix your iPhone 6s’ GPS woes.