In my previous post, Setup Mac OS X 10.8 Mountain Lion, Windows 7 Boot Camp, and Shared FAT32 Partition, I decided to use Mac OS X as much as possible and in addition to Windows 7. It would be nice if I could use the same applications (or equivalents) on both operating systems. And it would be great if those apps made use of the same data whether running on Mac OS X or Windows 7. Effectively, I would like to share my apps between Mac OS X and Windows 7.

My methods for “App Sharing” in order of preference are:

Evernote supports export/import but there was an export data format change between Evernote 2.1 and the latest Evernote versions. I found a forum post, New user help-importing Evernote 2.0 files into Evernote 4.1, which indicated that we need to use Evernote 3.1 for Windows to import the old Evernote 2.1 format and then export to the new data format. Actually, I found that Evernote 3.1 was cloud-enabled, so there was no need to export because the imported 2.1 notes were sync’ed directly to the cloud.

Here’s how I migrated from Evernote 2.1 to the latest version:

Because I use Intuit Quicken as a glorified expense tracking application where I manually input all the expenses and run summary reports, I was fine with using the very old Quicken 2003 for Windows. I used one Quicken file for each year and in the file, I used one account for each month. So, for each year, I could see the trend of how much I spent monthly (accounts listing) and how much I spent per category (itemized report).

From the reviews complaining that Quicken Essentials for Mac OS X is a glorified checkbook with transaction downloads from banks, it looks to be more than what I need because I didn’t want to download transactions from a bank. I don’t plan to provide my bank’s login credentials to anyone! After testing Quicken Essentials, I found that it was fine for my needs: manual expense input works great and the pre-defined summary, trend, and itemized category reports provided the info I wanted. 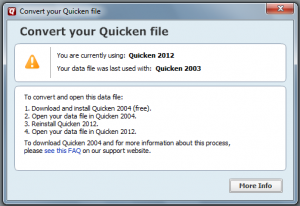 Thankfully, Intuit provides a copy of Quicken 2004 free for anyone who needs to upgrade to Quicken 2005 and later from a version earlier than Quicken 2004. To download and install Quicken 2004 Deluxe, do the following:

To export the Quicken 2004 files to a format compatible with Quicken Essentials for Mac OS X (and Quicken 2012 for Windows):

To import the exported .QXF files into Quicken Essentails for Mac OS X:

Besides selecting “All Dates” to view older entries, I noticed that the accounts listing is sorted alphabetically and there is no way to override that. I had to rename the accounts to re-order the list to match my needs; for example, changing “Jan” to “01 Jan” and “Apr” to “04 Apr” so January will come before April instead of after. I also hid some columns that I didn’t use. Unfortunately, I had to make these changes for each account because there was no way to change things globally.