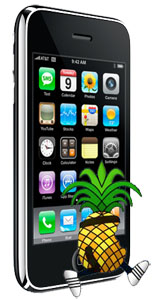 My nephew got an iPhone 3G and wanted to unlock it for use with his T-Mobile plan. Unfortunately, the iPhone was stuck in a weird state with only the Apple logo showing, and the iTunes application did not recognize it. I found that I could put the iPhone into Recovery mode. I then attempted to jailbreak using the custom PwnageTool firmware image I created in my last blog on iPhone jailbreak/unlock (my nephew’s iPhone 3G is the same model as mine’s). Unfortunately, the custom image restore process failed midway. I decided to load the latest official Apple iOS 4.2.1 image onto the iPhone and then use RedSn0w to jailbreak it.

After the restore, the iPhone booted up with the following two messages: “No SIM card installed” and “Insert a valid SIM with no PIN lock to activate iPhone”. And when I slide to unlock the iPhone, it displayed a dial-pad with the title “Emergency call” mode. There was no way to access the normal application home screen. This was okay and something RedSn0w will take care of as part of the jailbreak.

To perform the jailbreak, I followed the instructions from How to Prepare your iPhone 4.2.1 for Unlock using RedSn0w.

Thankfully, the iPhone rebooted successfully and I was able to successfully repeat the unlock using UltraSn0w. My nephew was very happy with his new T-mobile iPhone!