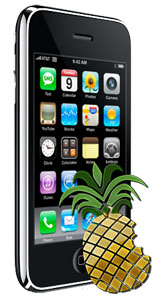 My friend gave me his old AT&T iPhone 3G. I decided to unlock it for use with T-Mobile. On the web, there was a lot of info on how to go about doing the unlock and a lot of caveats. I wanted to summarize my findings below and provide details on how I went about the process of unlocking the iPhone 3G. (Though I did the unlock on Mac OS X, the instructions for Windows are the same.)

First, we need to figure out what we are working with:

Unfortunately, my iPhone 3G had a baseband version 05.14.02 which was not supported by UltraSn0w according to this UltraSn0w unlocking tutorial. If I upgrade to iOS 4.2.1, the baseband version would be upgraded to 05.15.xx which is also not supported by UltraSn0w. The workaround is to upgrade the baseband to the 06.15.00 version, which is surprisingly provided in the iPad 1 iOS 3.2.2 image.

Updating to 06.15.00 baseband is not reversible (back to 05.14.xx or 05.15.xx) so it would void the Apple warranty (I didn’t care because the iPhone is out of warranty) and future upgrades would require custom ipsw images. To me, it looks like Apple doesn’t plan to upgrade iPhone 3G past iOS version 4.2.1 and even if that were to happen, I could figure out how to use PwnageTool to create the necessary custom ipsw image. So, I made the decision to upgrade the iOS version to 4.2.1 and the baseband version to 06.15.00 so I could unlock using UltraSn0w.

To perform the jailbreak, I followed the PwnageTool tutorial step by step:

To perform the unlock, I followed the original UltraSn0w tutorial step by step:

Finally everything was done. I shut down the iPhone, inserted my T-Mobile SIM card, and restarted. After startup, the iPhone took a couple of minutes to find the T-Mobile network. Because my T-Mobile plan did not have a data plan (and I didn’t want to be charged for one), I disabled the 3G connectivity function by going to “Settings->General->Network” and setting the “Enable 3G” and “Cellular Data” options to Off. I then tested the iPhone by taking a call, making a call, receiving a text, and sending a text. It works, yeah!

Unfortunately, when using PwnageTool to create the custom image earlier, I neglected to enable the very useful battery percentage indicator (which RedSn0w enables by default). To enable the battery percentage at this late stage, I found a useful guide, Enable Battery Percentage in iOS 4 on iPhone 3G without Redsn0w, which worked for me. (Hint: You may need to install “cmd-files” before you can install “iFile”.) After restarting the iphone, I went into Settings->General and turned on “Enable Battery Percentage”.

Hopefully the above is helpful. Good luck with your unlocking.