Windows 10 supports Android, but I think the support is very lacking. Supposedly, if you attach your Android smartphone to the Windows Phone app, you can then run Android apps on Windows 10 using the Phone app. You would have to have the latest version of the Phone app though. This is what I read because I don’t have an Android phone to test with. (Windows 11 will have better support for Android, but my PC doesn’t support Windows 11.)

Thankfully, there are solutions known as Android emulators. Basically, you can emulate an Android phone on Windows 10. (Android emulators can also run on Windows 7 and macOS.) With a powerful enough CPU and graphics card, emulated Android games are playable.

There are many Android emulators out there. I decided to use the one that seems to be the easiest to setup and has excellent gaming performance: BlueStacks. The downside to using BlueStacks is the sponsored ads that appear at the bottom of the emulator screen. If you are bothered by the ads, you can try a different emulator that does not have sponsored ads; see 10 Best Android Emulators for Windows You Can Use.

Note: I downloaded the “MEmu Play” emulator which supposedly does not have sponsored ads. However, when I tried running the MEmu installer, MalwareBytes blocked it as a “PUP.Optional.DotSetuplo” threat, indicating that it is bundled with a potentially unwanted program (PUP).

The first question I had about Android Emulators was: how does multiple touch gestures work with a keyboard and mouse? I mean most touch-based action games have you touching the screen with several gestures simultaneously. The mouse is used to make one gesture. What about the other touch points? 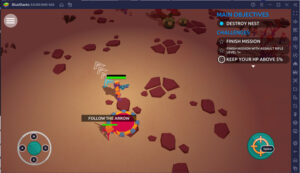 The answer is key mapping. BlueStacks supports assigning a keyboard key to be a touch tap on a particular point on the Android tablet screen. Also, WASD keys can be used to drive joystick-like behavior. BlueStacks has other touch gestures but I didn’t need to use them yet.

The first question you may have is why would I want to play Android games on a Windows PC? My answer is because I don’t have an Android device. Also, my 24-inch desktop LCD screen is huge! I could see graphical details that I couldn’t see on the phone’s tiny screen. Furthermore, my thumbs and fingers are not blocking the screen. Finally, it is ergonomically heathier to sit upright with a large desktop PC than to hunch over a small phone for hours and hours.

Here’s how to use BlueStacks to play an Android game:

Another game I recommend is “Starlost – Space Shooter”. It’s an action RPG-like game where you mine asteroids, fend off enemies, and try to earn enough to upgrade your ship so you can survive. (Opening Starlost will prompt you to update “Google Play Services”.)

There are plenty of cool exclusive Android games that are free to play. Have fun even without an Android device!