On my system, the cause is Windows 10 neglecting to install the “MTP USB Device” driver. MTP stands for Media Transfer Protocol, which Microsoft uses to allow access to files (like photos and videos) on iOS and Android devices. Under my Windows 10 machine, when I connect my iPhone, Windows 10 only installs the “Apple Mobile Device USB Driver” which iTunes uses. It does not install the “MTP USB Device” driver which File Explorer requires.

The solution is to manually install the “MTP USB Device” driver. This fix also worked for my iPad and iPod Touch.

Note: You may also have this problem under Windows 7 or 8. Or with an Android device. The steps below should still work.

Note: If you check “Portable Devices” under the “Device Manager” again, you will now see the “Apple iPhone”, “Apple iPad”, or “Apple iPod” driver listed. The “MTP USB Driver” is renamed to the specific device type.

Update: On a new Windows 10 machine, when I did the above for my iPad, the iPad device drive appeared in the File Explorer, but iTunes stopped showing the iPad device. I had to manually update the driver for the “Apple iPad” to be “Apple Mobile Device USB Driver”; after which, the iPad showed in both iTunes and File Explorer. 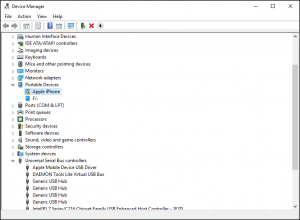 I have seen a behavior when on a subsequent connection, Windows 10 did not successfully load the “MTP USB Device” for my iPhone. When I checked “Portable Devices” in the “Device Manager”, I saw the “Apple iPhone” driver with a caution icon, meaning it was in error state.

To fix the issue, I just right-clicked on the “Apple iPhone” and selected the “Update driver” option. And then I followed the instructions above from step 5 onward.

Hopefully your Windows 10 system does not have this problem. If it does, I hope the steps above will resolve your issue.