Update 2: The instructions below will work to manually create a Mac OS X 10.11 El Capitan USB installation drive. I needed to upgrade my sister’s 2008 Macbook Pro and found that the existing Mac OS X 10.6 Snow Leopard did not support the “createinstallmedia” tool; I got a “Failed to start erase of disk due to error (-9999, 0)” error. I followed the instructions below to successfully create a bootable installer for Mac OS X 10.11 El Capitan, which is the last version to support the 2008 Core 2 Duo Macbook Pro.

I tried several methods which failed to create a bootable USB flash drive before finding one that succeeded. The instructions I found that worked, using Disk Utility, were located at How to Make a Bootable OS X Mavericks USB Install Drive and How to Create a Bootable Install USB Drive of Mac OS X 10.10 Yosemite.

First, download the latest Mac OS X version, which is 10.10 Yosemite. It is the version currently available for download from the “App Store”. (If you want an earlier version like Mac OS X 10.9 Mavericks, you’ll need to get it from elsewhere.)

By default, the Finder will hide system files which we will need to see. Run these commands in the “Terminal” app to expose the hidden files:

Restore the Yosemite installation image to the USB flash drive: 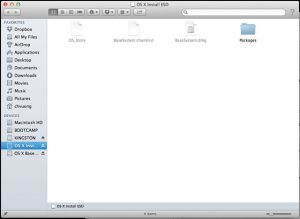 Re-configure the Finder to hide system files. Run these commands in the “Terminal” app:

To boot a Mac with the USB flash drive:

Hopefully, this post will help you to create your own bootable USB flash drive installer for Mac OS X 10.10 Yosemite or Mac OS X 10.9 Mavericks.