Recently, my trusty 2.4Ghz wireless G router (a Netgear WGR614) died after many years of service. I went looking for a new router and found that the information on which router to get was not clear or conclusively. The routers that people agreed were the best cost easily over $100. I wanted an inexpensive, reliable router with a strong signal, the same or better than my old router. In the end, I got a 2.4Ghz wireless N router for $25 (a new Cisco Linksys E1000 from craigslist) that matched my needs and actually provided a stronger wireless signal. 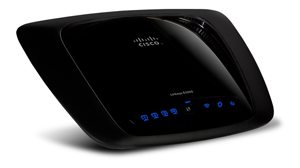 To help others avoid having to repeat my research, I will summarize my findings below. I will simplify things and that will mean leaving out some info; otherwise, this post would turn into a small book.

To compensate, 5.0Ghz Wireless N has methods to overcome such obstacles as walls. The most visible method is to use multiple antennas. Two or three antennas are common, though the newer routers have six or more. The antennas receive the 5.0Ghz wireless N signal and its many reflections (from bouncing off walls), which the router analyzes and combines into a strong signal. A second method is waveform shaping to increase the signal strength. This is similar to using a cone-shaped horn to amplify your voice. Unfortunately, like with the router, you have to know where the person you are shouting to is located so you can point the horn at him. A third method is to increase the signal spread from the standard 20Mhz to 40Mhz, similar to magically doubling the width of a clogged water pipe in order to get more water through. This would result in the router taking up double the frequency range and would only be viable if there is little or no congestion; if the pipe you are doubling the size of is right next to a bunch of other pipes, those other pipes would interfere with the size change.

Tip: If you have a Windows machine, I suggest getting the free inSSIDer Home 3.1.2.1 tool; the latest inSSIDer is no longer free. It will scan the 2.4Ghz Wireless G/N and 5.0Ghz Wireless N (if your Windows machine has a 5.0Ghz wireless N capable adapter) ranges and show all the wireless routers nearby. This will give you an idea of the congestion.

Update: If you have the cash, get the Linksys WRT1900ACS Dual-Band Wi-Fi Router. I purchased it for my brother’s large house and the signal strengths for both 2.4Ghz and 5.0Ghz were the best (strong and solid) that he had ever ever gotten. The 5.0Ghz signal was still 10-15% weaker though.

If you get a dual band wireless router, I recommend using different SSIDs (Service Set Identifiers, a.k.a. network names) for the 2.4Ghz and 5.0Ghz signals. Some recommend using the same SSID for both and leaving it to each wireless client to pick the strongest signal to use. The wireless client could also switch signals on-the-fly to ensure the fastest connection. However, in practice, I found that due to interference on the 2.4Ghz frequency, wireless clients switching to and from the 2.4Ghz signal caused the network connections to misbehave. And some old 2.4Ghz-only wireless clients, like Sonos hubs, got very confused. So, it is best to use separate SSIDs for now.

What I Ended Up With

Setup was a breeze. I plugged the Linksys E1000 into the wall outlet, connected my laptop by Ethernet cable to it, browsed to the E1000’s default gateway address, logged in (had to google for the default user/password which was blank user and “admin” password), and manually configured it. (I did not run the software on the included CD.) I setup up the same WPA-Personal security as my old router’s configuration. I manually forced Wireless G only mode (since any one of my Wireless G device connecting would force this), selected 20Mhz range (since WPA-Personal and Wireless G mode would force this), and channel 11 (it worked well in the old router and inSSIDer showed it was the best option).

After I finished configuring the router, I was pleasantly surprised to find that the 2.4Ghz Wireless G signal was significantly stronger than my old router’s signal. Machines at the back of the house that showed low connectivity before were now reporting good connectivity. The inSSIDer tool on my desktop (about 15 feet and two walls from the router) showed an increase from -50db to -40db in signal strength.

Finally, a cautionary tale on wireless repeaters which are devices used to extend the wireless range. It is like shouting to a friend, who then repeats the message to a second friend further away. A few years ago, I tried to use a Linksys WRE54G wireless G extender with my Netgear WGR614 wireless G router. It worked and boosted the wireless signal, but after a few minutes, my Netgear router went dead and needed to be rebooted. This consistently happened and I could only conclude that the Netgear router and Linksys extender did not like each other. Probably, compatibility is a lot better now. However, if you decide to get an extender, I would recommend getting the same brand as the router’s or getting something you can easily return. This gives me a thought… The Linksys WRE54G extender could get rid of my neighborhood wireless congestion if I were to use it to “helpfully” extend (aka “kill”) the neighbors’ routers. But that would be too evil.