The Sunroof From Heck 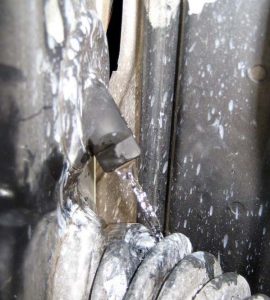 Three years ago, I went on vacation. I left my Volkswagen Jetta, not yet one year old at the time, at my parents for a week. During that time, there were heavy rains. When I came back, the left-front driver foot well was under three inches of water. I was sure that I had locked the doors securely before leaving… and all the windows, including sunroof, were closed tightly. What could be the matter? Maybe it was a leak somewhere on the driver side?

A wet vac, a lot of effort, and the problem was mostly solved, except for the unpleasant wet carpet smell which lingered before disappearing. Being a procrastinator, I never did take the car to the dealer to find the leak.

Since then, rains have come and gone. Unless the rains were heavy, I didn’t see any moisture in the cabin. But when the heavy rains came, the water appeared in the front driver foot well. I checked the driver-side door but didn’t see any wet trail. I couldn’t figure it out.

Recently, during some heavy rains, I noticed that the front right passenger foot well was also accumulating water. What the heck? Did my Jetta just spring another leak? I resolved to get down to the root of the problem; I went to the Internet and found complaints about the sunroofs from all cars including Acura, Mercedes, and Volkswagen (bingo!). 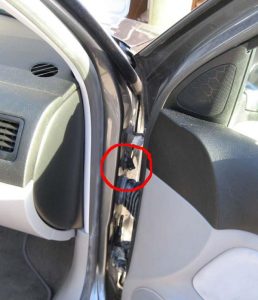 Evidently, the sunroofs are not water-tight. Water does get into and accumulate in the well of the sunroof. The water is usually drained away by tubes. If the tubes get clogged or disconnected, then the water builds up, eventually floods into the roof structure, and appears in the main cabin in several places. Supposedly once a year, you should check that sunroof drainage tubes and clear any blockage.

I cracked open the trusty Jetta owner’s manual; it didn’t mentioned anything about the above. What the heck? How many drivers out there are wondering why their brand new car with sunroof starts leaking after a year or two?

On the Jetta, there are four drainage tubes, one at each corner of the sunroof. The front two tubes come out in the middle of both sides, near the front door hinges. The rear two tubes comes out underneath both sides near the rear bumper. Now, why the front two doesn’t come out underneath, I have no idea. Worse, there are nipples at the end of each of the four tubes… I guess to promote clogging? 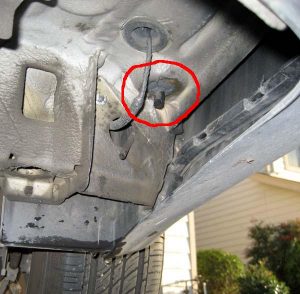 Others recommend cutting the nipples off, but I took the less severe method of squeezing the nipples to make them open wide. Pouring water into the sunroof and then squeezing the nipples caused all sorts of particles, some big and some small, to come out, followed by a torrent of freed water. Yippee! Now, I just need to remember to do this once or twice a year.

If you don’t have time to do the above, another quick fix is to use painter’s tape (aka masking tape) to seal all four edges of the sunroof.

Update: A couple of years later, Volkswagen issued a safety recall concerning this issue. The solution was to cut the rubber nipples off.