I decide to check the CPU temperature on my 2015 Macbook Air 11 inch using a free utility called HWSensors.

Note: HWSensors will install itself as HWMonitor app. Do not be alarm if a sensor shows a temperature of 129° Celsius; it means the sensor is missing or not functional. 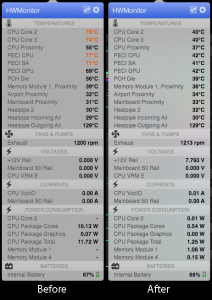 At idle (wait several minutes with no apps running), my Macbook’s CPU temperature remains at 70° Celsius or above. Intel Core i5 mobile CPUs usually have maximum operating temperatures around 100° Celsius so the idle temperature appears to be too excessive. The room temperature is around 30° Celsius (the “Heatpipe Incoming Air” sensor provides a good clue) so I would expect the idle CPU temperature to be 10-20° Celsius higher only. I think my Macbook has an overheating problem.

Tip: You can run the “Activity Manager” utility to double-check that the system is at idle — no process is taxing the CPU.

Tip: You can check the maximum temperature for your CPU model at the Intel website; look for the TJunction specification.

The first usual culprit for overheating is dust. I pop the bottom cover off the Macbook and find the innards are clean. I take very good care of my Macbook — no eating or drinking near it. (I once opened my niece’s Macbook and found food particles and a nail clipping scattered all over the logic board. Her mom told me she was messy but I didn’t believe it until I saw the evidence.) 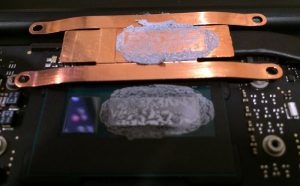 I remove the heatsink. The thermal paste looks pretty dried out, but I cannot tell how well it conducts heat with the naked eye. Oh well, have to replace it now. I clean off the old thermal paste from the CPU and heatsink using damped Q-tips. People suggest using rubbing alcohol, but I ain’t got none, so water it is. I use transparent tape to pick up dust particles or fibers that I can’t see (I do the same when installing tempered glass screen protectors).

Note: Be sure to use non-electrically-conductive thermal paste. So if you use a little too much, the excess won’t short out anything. 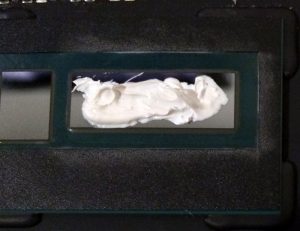 After allowing the Macbook to idle for several minutes, I check the CPU temperature. Success, the idle temperature is 40° Celsius.

Apple has decided to prioritize silence (avoid speeding up the fan until the CPU’s maximum operating temperature is reached) over longevity (avoid running at high temperature which shortens the life of the CPU and nearby components). As a result, the Macbook will run hot and temperatures will regularly spike to 70-80° Celsius even when you are not taxing the CPU. Usually, by the time you hear the fan go to maximum speed, the Macbook has probably been cooking the CPU for a while.

Opinions on when to replace the thermal paste range from 2 years to never. I think 2 years is too soon and never is unlikely because entropy. As a compromise, I make a mental note to check the CPU temperature every 4-5 years.

Update: I checked my sister’s 2013 Macbook Pro Retina 13 inch and found the same high idle temperatures. Once I replaced the thermal paste, the idle temperature dropped to around 40° Celsius also.